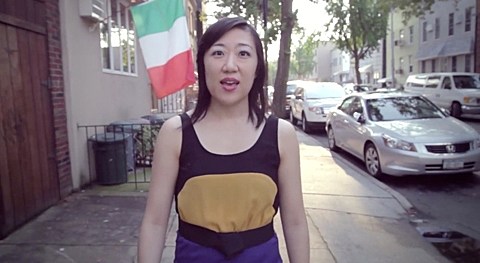 "We're Gonna Die" was inspired by an insight she traces to this incident, the idea that sadness brings isolation. We are most alone, most cut off from the possibility of comfort, when we are most in need of it. "It's not even like you can like rip off the mask and let it all hang out when you're in private around people who care about you," she confides, "because there's only so long you can keep dumping your pain on other people before eventually they start to get fed up. Which makes being in pain an incredibly lonely experience."

Also a universal one of course. The charm of "We're Gonna Die" is in how effectively (and humorously) Ms. Lee converts the exaltation that pop music can spread into a kind of collective consolation for life's unavoidable woes. Employing the same basic tools of songcraft -- catchy choruses, relatable lyrics, uplifting melodies -- she applies them not to the eternal subject of swooning romance but to darker if no less common experiences (more common experiences, probably): loneliness, unhappiness, the gut-churning 4 a.m. fears about the pointless mystery of life that all sensible souls are prey to. There is comfort, Ms. Lee suggests, in public celebration of the private misery we keep locked away for fear it will leave us too exposed. [NY Times]

Earlier this year, playwright Young Jean Lee adapted her cabaret We're Gonna Die, that she debuted in NYC at Joe's Pub in 2011 (the show the above review is from), into an album -- the debut release by her band Future Wife. The album has an impressive list of guests either performing or reading monologues, including David Byrne, Laurie Anderson, Kathleen Hanna, Ad-Rock, Matmos, Colin Stetson and Sarah Neufeld. It was produced by Shannon Fields of Stars Like Fleas and Leverage Models. Lou Reed was a fan too, and called her "one of the most accomplished, articulate, versatile and hilarious playwrights, musicians, artists that we in America have to offer."