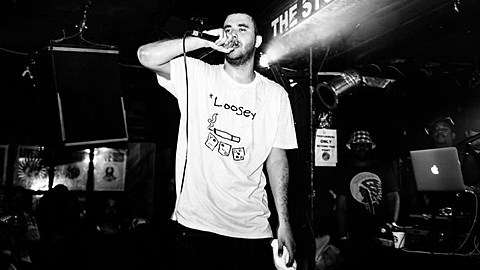 New York rapper Your Old Droog started picking up some buzz earlier this year when he dropped his self-titled EP on Soundcloud and was immediately met with reactions saying he sounded like another NY rapper, Nas. So much so, that rumors actually arose that Young Old Droog was the legendary MC himself. Those rumors quickly inspired a Complex writer to clarify, "I met Your Old Droog before and he's not Nas," and they were entirely silenced when Droog made his debut performance at The Studio at Webster Hall in September. A few weeks after the show, MTV brought up the rumors to Nas in an interview, and he'd never heard of Droog but clarified he would never release a secret EP. "I want you to know it's me when I drop."

Through Your Old Droog may not be the man behind Illmatic, he's still a promising young rapper himself. (Perhaps not as promising as Nas was as a young rapper, but that's not really a reasonable expectation.) He followed the EP with a self-titled LP in late November (which included all 9 songs from the EP), and here's what NPR had to say about it:

The songs are short and sharp, and all the hoopla around Your Old Droog has turned out to be decidedly beside the point. [...] He's so virtuosic it's funny, so insouciant I'm embarrassed to use that word, indifferent to what he calls "social events." Really, really smart. The music he chooses to pair with his words is melodic like we forget it can be; it feels good like Bobbito asking what you're supposed to say at the end of records.

You can catch Droog in his hometown tonight (12/12) at Music Hall of Williamsburg with opener Dave East. Tickets are available.

Stream the EP below...