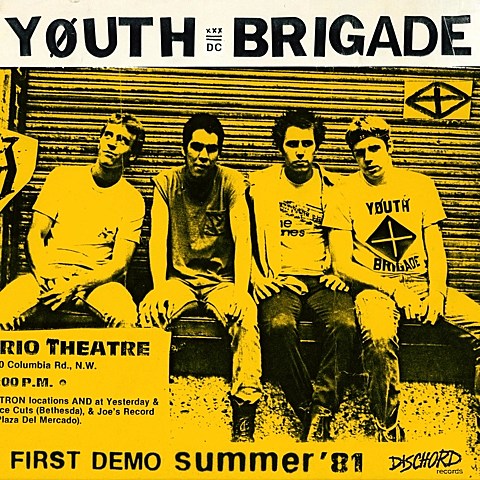 DC hardcore veterans Youth Brigade (not to be confused with the LA hardcore band of the same name from the same era) were only around very briefly in the early '80s, having released just one EP on Dischord and contributed to the influential Flex Your Head compilation. Besides a few one-off reunions, like at the Salad Days show in DC in 2012, they've remained broken up. They still are, but they're now giving the first-ever official release to their first demo on November 23 via Dischord (pre-order). We're streaming its track "Bouncer," and here's what founding members Nathan Strejcek and Danny Ingram tell us about it:

Though it's been on one or two bootlegs over the years, this is the first official release of "Bouncer." It's about our experiences at the Bayou, a DC club that often employed locally stationed marines as bouncers/doormen, many of whom had a less than cordial relationship with the punks who attended the shows. The song was written right after the Bad Brains played there. I managed to get into the show, but Nathan's fake ID was easily spotted and he was given the bum's rush. Once I was in, I found the staff was their usual belligerent selves - hassling kids who were dancing and jumping about, all the while castigating those who didn't drink. In those days, righteous indignation often wound up as a song at the very next rehearsal. Such is youth and such was the case with this song. Nathan and I had a lot of fun transcribing the lyrics on "Bouncer" - it was, by far, the most challenging - but it was fun recreating the memories of that time.