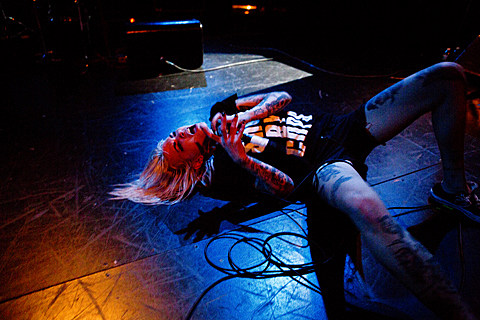 L.A. industrial/hardcore duo Youth Code have announced a one-off NYC show at Saint Vitus on January 27, where they'll be joined by like-minded harsh-electronics outfits Statiqbloom and Sannhet. Tickets are on sale now. Youth Code, who put out a new EP earlier this year, are currently on tour with Skinny Puppy, with whom they've already played a bunch of shows this year. (Skinny Puppy are also not happy with the U.S. government using their music in Guantanamo torture). They'll also be headed to Sweden in 2015 for Kollaps Festival. Full lineup for that fest is listed below.

As mentioned, Statiqbloom just had to postpone the remainder of their tour with Corrections House, due to that band's singer, Mike "IX" Williams, being ill. Sannhet, meanwhile, have a new album due out in March called Revisionist and it's being released via The Flenser.

All upcoming dates for the Youth Code are listed, along with Sannhet's new album teaser, a stream of Statiqbloom's new split with Zex Model, and a stream of Youth Code's recent EP A Place To Stand, below.