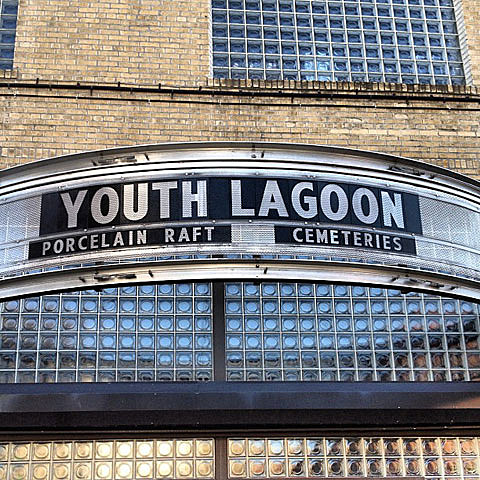 Youth Lagoon's tour brought him to Music Hall of Williamsburg last night (3/28) for his second of two sold out NYC shows. Pictures from the first night at Bowery Ballrom (3/27) are HERE.

The show began with a set from Buffalo, NY's Cemeteries, the recording moniker of Kyle J. Reigle (he has a band live). Last night and the previous night's Youth Lagoon shows were the second time Cemeteries played NYC, having first opened for Howler this past January. Not the most exciting band to watch, but they had a nice batch of catchy dream pop songs and didn't overstay their welcome. You can catch them in NYC again when they open for Gauntlet Hair in April.

Up next was Porcelain Raft, whose live set up now includes main Porcelain Raft guy Mauro Remiddi and a live drummer. After walking on stage, Remiddi triggered a drum/synth loop and for about 6 seconds. They sounded like what I pictured Porcelain Raft sounding like live, until the explosive drumming and soaring guitar came in. For someone who seemed so set on abandoning his rock band for the bedroom musician approach, Mauro Remiddi looked like he was meant to be on stage. He moved around as if he was backed by a full band, traded melodic parts with noise guitar freakouts, and kept an overall confident demeanor on stage. His drummer was as charismatic behind the kit as Remiddi was behind the mic, and he rotated between high energy rock beats and crescendoing sound pieces that fell somewhere between the noise breakdowns of Sonic Youth's Steve Shelley and the improvisational rhythms of Joanna Newsom's Neal Morgan.

Youth Lagoon, who I personally had not seen live before, finally took the stage a bit before 11 PM, opening with "Afternoon," off of his 2011 debut, The Year of Hibernation, which he played all of, in addition to both tracks on the bonus 7". Like others have said, I wish he would get a live drummer, but I was surprised at how loud he sounded with the drum machine and how much it got the crowd dancing (and fist bumping).

Trevor Powers and his guitarist Logan Hyde definitely know what they're doing on stage, but the intimacy that makes The Year of Hibernation such an appealing album was lost in the live setting. Trevor sang without reverb/distortion and revealed that he's actually got an incredible set of pipes, but I thought it took away one of the album's most attractive aesthetics. Members of the crowd didn't help and were in part to blame for taking other listeners out of the moment (the quietest parts of songs were met with football fan cheers of "YEAH TREVOR"). That's out of the band's control, but it just acted as another signifier that maybe these songs only belong in the bedroom. I know it's selfish of me to imply Youth Lagoon shouldn't move forward in his career (just look at how far Bon Iver has gone), and it wouldn't be fair to call the show a disappointment (again, they did play really well and the crowd was very into it), but it just wasn't the experience I expected (or was looking for).

YL continues on tour. All dates and the setlist from the Brooklyn show below...