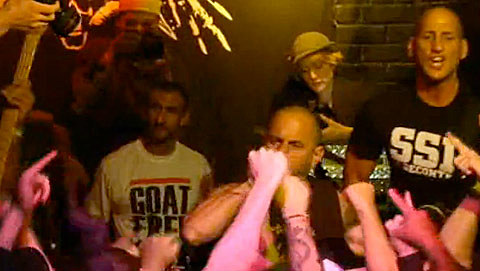 After the boat cruise on Saturday, my original plan was to hit Santos for Youth of Today but that was before I heard about the surprise show at the infinitely smaller Acheron later that night (10/22). Featuring appearances from The Last Stand (mem Inhuman) and Mouthpiece, the show sold out around 12 midnight with 150 lucky people crammed into the venue. I caught some of The Last Stand's NYHC before slipping out to catch a drink and returning in time for Youth of Today. As tight as ever, the "youth" crew played many highlights from their catalog including the entire Disengage 7", "Break Down The Walls", "Flame Still Burns", "Positive Outlook", "Take A Stand", and even a cover of "Minor Threat". Though the band was tight and well-executed, I noticed that Ray Cappo's screaming voice was gone, a fact that wasn't apparent at the Mohawk show during Chaos in Tejas. How was it at Santos? Regardless, the crowd was beyond pumped and so was I.

Pictures are on the way. Meanwhile check out the videos below...