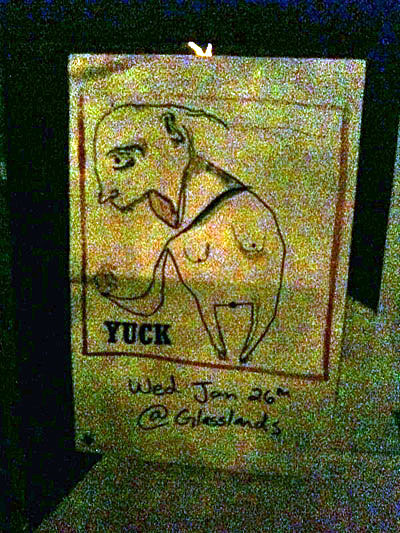 After spending a day unsucessfully trying to get to America, UK band Yuck finally made it, though barely. Maybe they stopped at a hotel for a second, but I wouldn't be surprised if they actually just went straight from the airport, through the blizzard (their first-ever picture of NY), directly to Glasslands in Brooklyn where they arrived around 11pm much to the relief of anyone who recognized that afro walking through the packed crowd. My relief was mostly in that I didn't make the treacherous (but beautiful) trip out just for three local bands (no offense to Darlings & Total Slacker, and especially Fergus & Geronimo who all made it worth being there as well - I showed up early to catch the whole show).

By the time Yuck actually went on - around 12:30, I was tired and Yuck had to be too, but after a few shy Thank Yous (mostly to their label Fat Possum), Yuck dived into their 30 minute set which, a few technical issues aside, seemed mostly on point. Was it amazing enough to compete with the natural wonder that was going on outside - massive amounts of snow, lightning and thunder included? Not really, but, all things considered, it was a solid set of "warm and fuzzy indie rock" from the band who kicks off tour with The Smith Westerns on Friday. I'm looking forward to checking them out again under normal circumstances - maybe at SXSW or next time they return to NY.

Fergus & Geronimo play Cake Shop on Friday (to quote them, "weather permitting"). Three videos of Yuck from last night (thanks Adam), below...