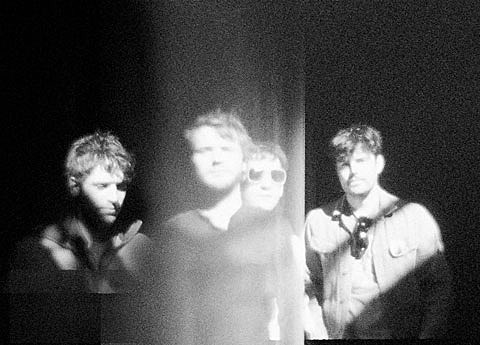 I am super bummed to report that UK band Yuck have cancelled their planned trip to the United States due to "personal reasons". They were set to play four shows (all still listed at their MySpace). One was in Philly, one was in Boston, one was the the PopGun party at Glasslands, and one was the official BrooklynVegan CMJ showcase at Music Hall of Williamsburg happening Thursday, October 21st.

Luckily, the recently-signed-to Secretly Canadian band Suuns (who we have talked about a few times) have stepped up at the last minute to take their place on the bill which now looks like this:

Music Hall of Williamsburg, October 21, 2010
* The Pains of Being Pure at Heart
* The Blow
* Screaming Females
* Suuns
* Young Man

It was especially nice of Suuns since it now means they are playing two official CMJ showcases in one night. They're also part of the Jagjaguwar/Secretly Canadian/Dead Oceans show happening at Pianos that night:

Might as well mention that S. Carey is playing a BrooklynVegan show too, Saturday (10/23) during the day at Public Assembly (full lineup TBA). Might as well also mention that Small Black are playing Shea Stadium in Brooklyn on October 15th (Friday) with We Are All Romans and "VERY Special Guests". All Small Black dates below.

Meanwhile, Suuns (grab some MP3s above) are still out on tour with Land of Talk, though only for two more Texas shows before CMJ, but then they'll resume touring with Land of Talk after CMJ, and that's when they are back to play Bowery Ballroom on November 6th. They have also added a NYC show that takes place after their tour, at Glasslands Gallery on November 14th with BELL, Emil & Friends, and New Moods. The Glasslands show is New Moods' 7" release party, and New Moods have some shows sooner, including CMJ, too (listed below).

All dates and Suuns' new-ish video for "Up Past The Nursery" below...

Suuns- Up Past The Nursery from Suuns on Vimeo.