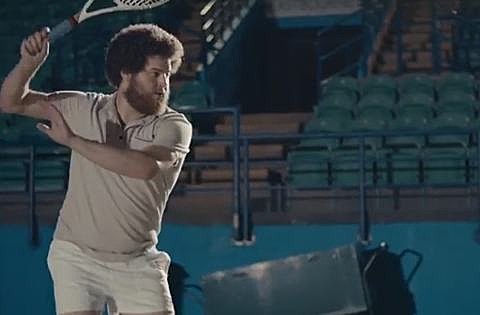 The U.S. Open just finished a week or so ago, but if you still need a tennis fix, might I suggest Yuck's new video for "Middle Sea"? In it, fro'd drummer Jonny Rogoff (looking McEnroe-esque), faces off against someone more than twice his elder and the two clearly have a rocky history. Filial issues play out on the court: words are had, rackets are thrown (more McEnroe!), and sports drink is spilled. You can watch the video below.

Yuck's new album, Glow & Behold, is out October 1 and the band doesn't seem to have been slowed down much by frontman Daniel Blumberg's departure, as they're still cranking out the catchy '90s style indie rock in the vein of Teenage Fanclub, Versus and Sebadoh, with a little MBV-style glide guitar dappled across at least a couple tracks.

Yuck will be spending the early part of October on tour with Pixies in Europe but will be in NYC for CMJ. The only announced show so far is at Mercury Lounge on 10/18. The whole line-up is pretty good, featuring UK noisemakers Eagulls, soulful crooner Willis Earl Beal, and Montreal's krautrocky Absolutely Free. Tickets to that show go on sale Friday (9/20) at noon. If you have a CMJ badge you can get in with that too, based on capacity of course.

All Yuck tour dates are listed, along with the "Middle Sea" video, below.