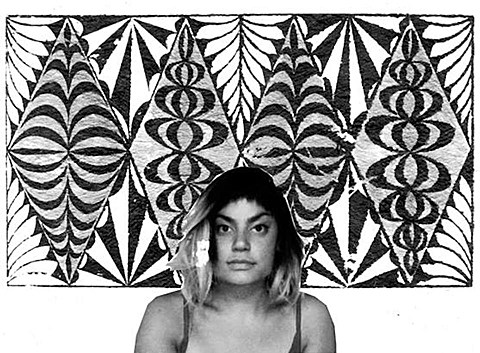 Malportado Kids is the other band of Downtown Boys singer VIctoria Ruiz, and they put their new record Total Cultura out earlier this year on Dead Labour. It's more electronic than Downtown Boys' political punk, but you'll probably dig this if you dig DB. Listen to three tracks below.

Downtown Boys used to be on Priests' label Sister Polygon Records before signing to Don Giovanni (like Priests), and that label also has synthpunk band Sneaks who play Impose Fest. You can listen to them below too.

Abdu Ali makes what could sometimes be described as rap, but it's very experimental and seems to pull more from outside of the genre than from other rappers. Check out one of his recent singles below.

Try The Pie are a San Jose punk band who will also play the NYC-area with Waxahatchee in October, and their latest Domestication LP is definitely up a similar alley. (It was mastered by Kyle Gilbride, who plays in Swearin' and also worked on Waxahatchee's latest.) The record's out on Salinas (Swearin', All Dogs, Radiator Hospital) and fans of that label's other output will dig this too. Stream it in full below.

Yvette have a new EP coming. Geoff Rickly's band No Devotion have a new LP coming, and he also opens the Creepoid / Marriages show at MHOW on 7/24 (tickets). And Adult Mom put out a new song off of their Tiny Engines debut today. Listen to that below too.