Yvette in an auto garage 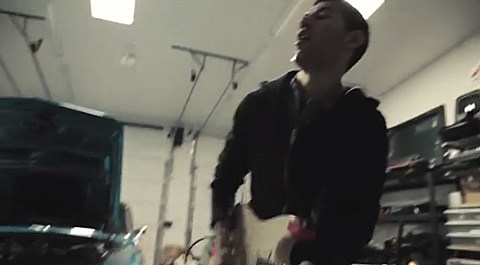 Yvette are a finely tuned postpunk engine whose industrial-strength noise already sounds like it was created in a machine shop. So it seems fitting they'd play in a auto garage amongst a bunch of classic Mustangs. Thus is the case for the latest in Into The Woods' latest 'Homesick' session which Yvette took part in while in Boise, ID for the Treefort Music Festival. The video makes its premiere in this post and you can watch it below.

Back in Brooklyn, Yvette have played Death by Audio nearly 20 times in their existence, including two record release shows. They'll play DbA one last time on November 15 with Big Ups, Ovlov and a "super secret headliner" that the Yvette haven't even been told about yet. (At least that's what they told us.) Any guesses?

If you're going to this show (or any of the other final DbA shows) be sure to head next door for the Death by Art installation which opened last night (11/6) and is genuinely awesome.

Yvette also play with Shamir and Mister Small at Baby's All Right on November 20 (tickets). If you haven't heard Yvette's 2013 album, Process, you can stream a few track, along with the "Absolutes" video, below...