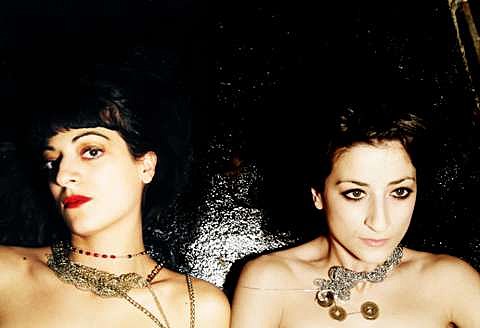 Fixtures on the Brooklyn scene for a while now, sisterly duo Zambri released their debut, House of Baasa, about a month ago o Kanine records. Dark and sweaty, it's a bit like a Jungle Themed Siouxsie Sioux with a number of standout tracks -- "Carry," "ICBYS," and "Hundred Hearts" which you can watch the video for below. You can stream the whole album below as well.

Zambri have a few other dates coming up -- including the Kanine Records Northside showcase at Knitting Factory on June 14 with Eternal Summers, Bleeding Rainbow, Beach Day and some TBDs -- which are all listed below.

Zambri, with their seriously awesome drummer and complicated microphones, play tonight (5/10) at Public Assembly as part of a pretty good bill. Also playing are Computer Magic (aka Brooklynite Danielle Johnson) who makes appealing retro-y synthpop. Her debut EP, Orion, is out now and you can stream it below.

Openers Test House just released their debut EP, Bitemarks, a couple weeks ago. The duo make glitchy dance music and you can stream the EP below. They have a pedigree too: Peter Schuette used to be in Silk Flowers and Psychobuildings, and James Elliot spent time in Bear in Heaven and School of Seven Bells.

DJing between sets is Pains of Being Pure at Heart drummer Kurt Feldman who also fronts '80s romo-loving Ice Choir. Feldman remixed Zambri's "ICBYS" which is downloadable above, and they just dropped the first taste of Ice Choir's debut album, Afar, which is out in July on Underwater Peoples. You can download that above too.

Streams and Zambri tour dates are below.