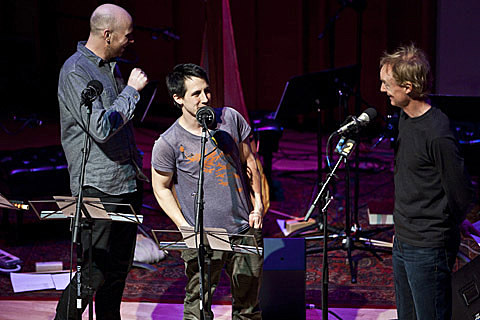 Zammuto (aka Nick Zammuto of The Books), who recently played Estatic Music Fest, will release his self titled LP on April 3 via Temporary Residence. The new album is decidedly more pop than his work in The Books, but definitely maintains an experimental edge. Most of the vocals are heavily processed through vocoders and like much of the experimental pop coming out recently, the songs refuse to decide between organic and electronic sounds. The end result recalls the catchy frantic moments of Battles or a glitchier version of Four Tet's folktronica work. Grab album track "Too Late To Topologize" above or stream it below along with three other album tracks. Also below is the album artwork and tracklist. The album is available for preorder at the Temporary Residence webstore or as a home-screen-printed deluxe edition at the Zammuto webstore.

As mentioned, Zammuto (the band) will head out on tour after the album's release with labelmates Explosions in the Sky. His website also notes that they'll be adding a few headlining shows soon. Those haven't all been announced, but we do know that one of them is a Brooklyn show at Glasslands on April 30. Tickets for that show are on sale now.

--
Zammuto - "Too Late To Topologize"