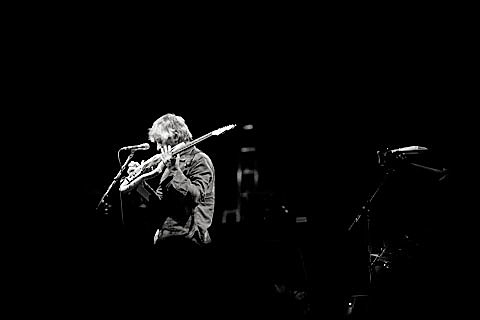 Zeena is curating from November 17-22 and her residency kicks off with an 8 PM set with Nate Wooley and a 10 PM set with White Out on 11/7. Her group Phantom Orchard plays two sets on 11/18. Nels Cline and many more join her the days that follow. Check out her full schedule below. All upcoming events at The Stone can be seen HERE.

Meanwhile, a group of Stone regulars will be playing a special show at Santos Party House on November 11. The show is a benefit for the Film-Makers Cooperative called Live/Film/Sound/Tracks, which as the name implies will feature live-scoring of 16mm films from its collection. The impressive lineup of talent includes Alan Licht, Lee Ranaldo, Wollesonic, Bill Morrison, Lea Bertucci, Victoria Keddie with MV Carbon, Dafna Naphtali and Optipus with the Underworld Oscillator Corporation. Tickets are on sale now. The films screened will be announced the night of the event.

Lee Ranaldo, who we caught playing with The Cribs at Pop Montreal, has some solo shows coming up, including one in NYC at Trans-Pecos on November 13. Tickets for that show are still on sale.

Check out a video of Lee Ranaldo and Zeena Parkins performing together in 2012, along with the full schedule for Zeena's Stone residency, below...