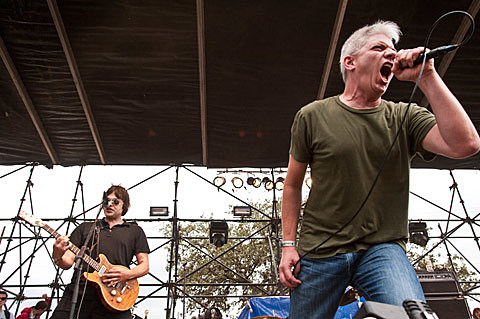 It came out of nowhere in 1982, this punk rock/hardcore fireball with the bright yellow sleeve. In one sense, The Zero Boys' Vicious Circle was yet another example of how U.S. punk seemed to peak coast to coast that year. But unlike most coastal punk, the Zero Boys were pointing the way to a scene that could accommodate heaping helpings of melody, intelligence, and rock 'n' roll sus, not just turbo-charged ferocity.

From 1979 into '83, the Indianapolis based ZBs were the finest hardcore blitz in the Midwest if not all the lower 48 states. Proof is Vicious Circle and the two decades since of copyists, bootleggers, practitioners and reunion concert pogoers.

Though before and after that LP's 1982 release they recorded the Livin' in the 80's 7", songs for three comps and released the post-mortem History Of... cassette revealing their transformation into a toured band warming to the metaphysical and their demise while still waving torches of rock 'n' roll panache

Indiana punk band Zero Boys have reunited off and on since the 90s, including Fun Fun Fun Fest 2011. Now the band has not only the new Pro Dirt EP on the way via 1,2,3,4 Go Records, but also promises dates in the US and Europe. An NYC show has emerged; look for the band to join forces with Night Birds on August 29 at Europa. Tickets are on sale.

All currently know tour dates are listed, along with a stream of "Monkey Meat" from the new EP, below.