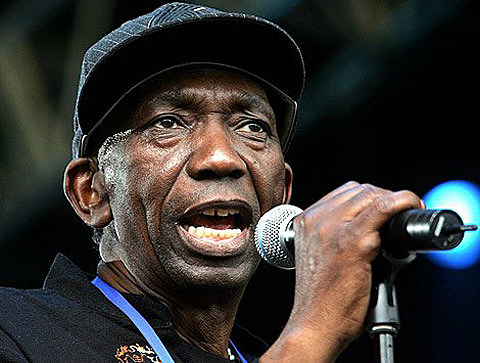 Thomas Tafirenyika Mapfumo (born 1945) is a Zimbabwean musician known as "The Lion of Zimbabwe" and "Mukanya" for his immense popularity and for the political influence he wields through his music, including his sharp criticism of the government of President Robert Mugabe. He both created and made popular Chimurenga music and his slow-moving style and distinctive voice is instantly recognizable to Zimbabweans.

Thomas Mapfumo & the Blacks Unlimited is currently touring the Northeast, and will hit the West Coast in August. Look for him to take to the stage of Mercury Lounge in NYC TONIGHT (7/15) with the Sim Redmond Band, Black Castle (feat. Elliot Martin of John Brown's Body) and Thousands of One (tickets). If you miss it, he'll be back soon. After doing a few dates in Massachusetts, look for him to retun to NYC to play Southpaw on 7/20 with Akoya Afrobeat (tickets). All dates are listed below.

Speaking of Southpaw, one alternative to the Mercury Lounge show is to see Swamp Dogg at the Brooklyn venue tonight. Swamp Dogg played his afternoon show at Metrotech yesterday with at least one member of Yo La Tengo in attendance.

No word on what Mapfumo, who lives in the United States now, will do in between dates, but I'm guessing he won't return to his native Zimbabwe where he reportedly as an outstanding warrant for purchase of stolen cars... Or maybe not?

[Mapfumo] told Daily News last week from his American base, "This police spokesperson you spoke to, the one who gave you that statement does not know how to do his police work because I do not have a police docket open. There was never a police docket opened against me in the first place."

Mapfumo said contrary to what the police were saying, he was actually the one who reported George Sibanda (the notorious car thief who reportedly sold him the cars) to them.

"I want my four luxury cars back because they just disappeared without any trace. I sent my manager there after the police had said we could collect the impounded cars but when he got there he could not find them. It is actually me who has a case with the authorities. They have to give me back my cars," said Mapfumo.

Check out the Chimurenga musician on the road. All dates are listed below...