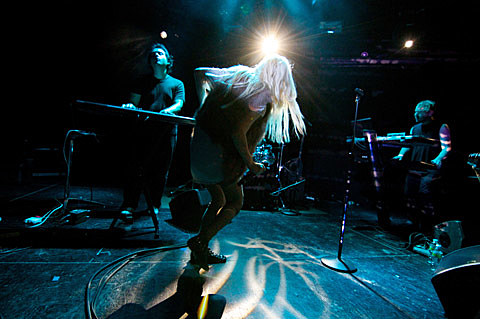 For her upcoming performance at the Guggenheim May 10, 2012, Zola Jesus has enlisted the talents of one of her most deeply admired performers, JG Thirlwell. Thirlwell is a composer/ producer/ performer based in Brooklyn, who also works under many pseudonyms including Manorexia, Foetus, Steroid Maximus and several others. If there is a common thread to his varied musical styles, it is a dramatic intensity and an evocative, cinematic quality. JG has collaborated with an extraordinary roster of artists including, Nine Inch Nails, Excepter, Kronos Quartet and The The; his compendium is a virtual who's who of every exceptional experimental recording artist of the last thirty years.

For this performance, JG has arranged nine of Nika's songs for string quartet, and enlisted the Mivos Quartet. Nika and the quartet will perform original arrangements from her last two albums, Stridulum and Conatus, while JG acts as musical director. It promises to be a uniquely special evening for fans of both artists. Tickets go on sale April 17th for members and April 18th to the general public.

Meanwhile, tickets are already on sale for the Grouper/Julianna Barwick show at the Guggenheim. Cold Cave tickets go on sale April 3 for members and April 4 for nonmembers.

All Zola Jesus tour dates are listed below...