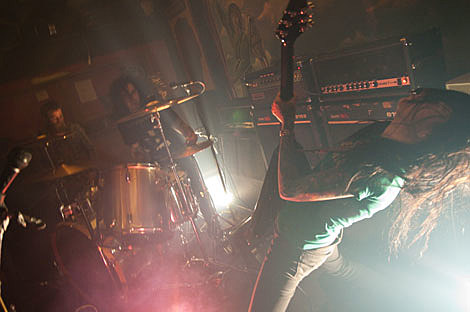 It's already way obvious that the next month is gonna be NUTS! Zoroaster are up there ruling as we speak -[GrimKim, Tuesday night in Birmingham, Alabama]

The Summer Southern Burn Tour is in full swing, having kicked off the trek at The Nick in Birmingham, AL. Zoroaster. Black Tusk. Dark Castle. It's an unstoppable trio of bands that will crash land in NYC on July 9th when they team up with Hull for the BV /1000Knives production at The Studio at Webster Hall. Tickets are still on sale.

BV will have reports from Kim Kelly, aka Grim Kim, from the road on the Summer Southern Burn Tour.

As if the tour isn't grueling in itself, Dark Castle have added some solo dates on the off days. Updated tour dates for the trek, as well as Dark Castle's new dates and some video are below.