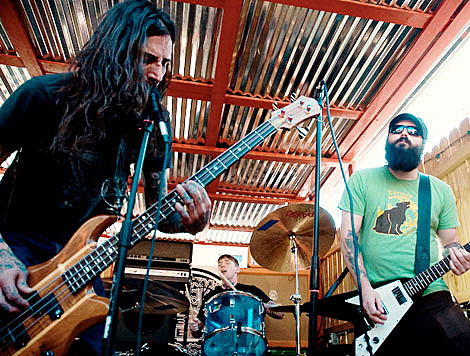 Zoroaster has a new 50s B-movie horror-tastic video for their Voice of Saturn rager "White Dwarf". The clip, directed by Nick Hood was shot in their native ATL and features, much like the song, Brent Hinds of Mastodon. Check it out below.

During SXSW, Zoroaster debuted a ton of new material from their forthcoming new album for E1, Matador. The material had the weighty Zoroaster feel, but with less of the droney heaviness and a more direct, almost doom-meets-crust punk direction. No word on when the Sanford Parker-produced LP will actually hit the shelves (though a release party is scheduled for July 17th in their native Atlanta with All The Saints and Wizard Smoke). In the meantime, dig on some video of the new track "Ancient Ones" from the BV show at Hoeks, along with new official video described above, below.