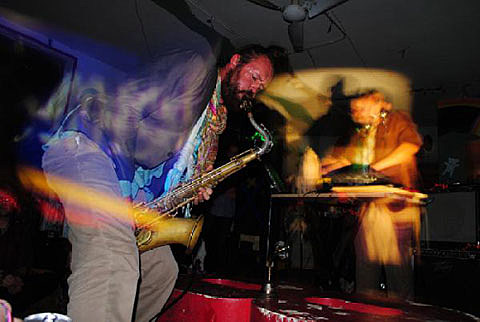 Unlike basically every other cultural outlet, the writers of Tiny Mix Tapes voted to give their Album of Year honors to an artist that isn't Kanye West. Instead, they gave it to NYC avant-noise/rock group Zs for their excellent 2010 album New Slaves. (Don't worry: Kanye still made #10.)

Zs will start the new year with a complement to that record, New Slaves II: Essence Implosion!, a collection of remixes that comes out on the Social Registry on Tuesday, January 25th. On the record, the band's tracks are reworked by the likes of Genesis P. Orridge, JG Thirwell, Gabe Andruzzi of The Rapture and others, and the whole thing starts off with a new track featuring Charlie Looker, Weasel Walter and WFMU's Marty McSorely. Two of those remixes are posted above, along with an exclusive mix not on the release done by Justin Pearson of The Locust (That's the Leg Lifters "Professional" Remix of "Gentleman Amateur"). You can also check out "Acres of Skin" from New Slaves, to give you a taste of the source material.

Zs have an album-release show for the disc Monday/tonight at Knitting Factory with Thee Majesty (Feat. Genesis P-Orridge), Ecstatic Sunshine, Cex and DJ DRUZZ (The Rapture/Throne Of Blood). The group has a special set (with an extra member) planned in honor of the release, so expect something unusual. Tickets are still on sale.

Also coming up, Zs: Black Crown Ceremony will play with Sightings, White Suns and Normal Love at Death By Audio on January 28th.

See a Zs live session from SXSW, the album's tracklist and more below...