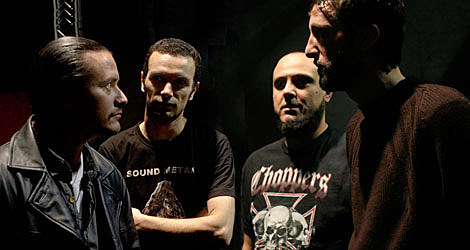 Somewhere at the crossroads of no-wave, tribal drumming, free-jazz, and heavy punk sits the Italians Zu, the latest in a long-line of astonishing Mike Patton co-conspirators that have included John Zorn, Melvins, Dave Lombardo (Slayer), The Dillinger Escape Plan, Dan The Automator, and many many others. Zu is composed of Jacopo Battaglia (drums), Massimo Pupillo (bass) and Luca T. Mai (saxophone). They formed in 1999. To date, Zu have released a staggering fourteen albums, have toured the world with over 1,000 gigs logged including multiple in collaboration with Patton.

And much like Ipecac founder Mike Patton, Zu is no stranger to the collabo, having worked with names as varied as Thurston Moore, Damo Suzuki (Can), Fugazi's Joe Lally and Guy Picciotto, Ken Vandermark, and Hamid Drake.

Zu's new album Carboniferous is out on Ipecac Recordings on Feb 10th, and includes contributions by both Patton and King Buzzo (Melvins). Check out "Ostia" from Carboniferous available for download above, another three tracks streaming on their myspace, and pray that these guys get back to NYC soon.

Full tour dates below and some video below...