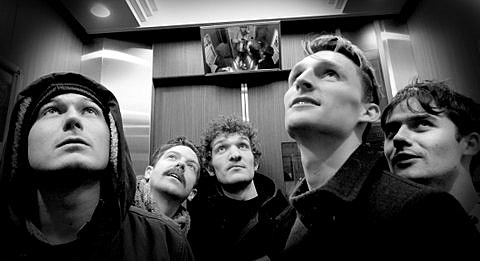 London rock band Zulu Winter were last here in April playing shows with Polica and Willis Earl Beal and are stopping in NYC on Tuesday (6/12) at Mercury Lounge on their way to Toronto's NXNE Festival. It's a late show (doors 9:30) and is with Dinowalrus. All upcoming Zulu Winter tour dates are listed below.

We're also giving away a pair to tickets to the show and details are below.

The band are set to release their debut album, Language, which comes out next week (6/19) on Arts & Crafts and is recommended for lovers of atmospheric, anthemic Brit-style alt-rock. The record veers into Coldplay territory on the ballads, but the upbeat numbers are pretty good. You can stream the whole album at their website and watch the video for below.

Meanwhile, openers Dinowalrus just got released a remix of their song "Rico" done by Jez of Factory Records legends A Certain Ratio which you can listen to over at Interview.

======================
For a chance at winning a pair of tickets to see Zulu Winter at Mercury Lounge: either tweet something that includes both @BrooklynVegan AND "Zulu Winter" in the tweet, or send an email to BVCONTESTS@HOTMAIL.COM with the subject line "Zulu Winter". Include your first and last name in the email. We'll pick a winner at random and contact them with more details. If you enter by email, it will not be shared with anyone else. Good luck!
======================