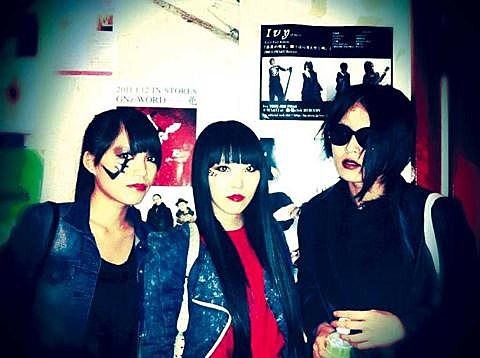 Japanese-born/Brooklyn-residing post-punk trio ZZZ's were formed this past March with Youkaku (guitar/vox), Yukary (bass/vox), and Lyn (drums), all of whom were members of Hystoic Vein, who broke up in October 2011. They've got three bleak studio recordings online at the moment -- the piercing, Yeah Yeah Yeahs-sounding "Suicide," and two drearier, yet equally dissonant cuts, "Dystopia" and "Cut it Out" -- all of which you can stream below. You can also check out a few live videos of other songs from their Fontana's show this past April, the chugging "Busy Bee," and the no-wavey "Hour Glass."

The girls will be playing a handful of local shows during and before CMJ. First they'll play Glasslands on Sunday (10/14) with Pony Bones and Electric Set (tickets). Then for CMJ, they'll play Cake Shop on October 17 with Hussle Club, I.R.O.K., Punks on Mars, Ghost Wave, Pyschobuildings, Half Undressed, Communist Daughter, and Blessed Feathers; the Sam Mickens-presented show at Bowery Electric on 10/18 (4 PM) with Blue Hawaii, TOPS, and Jack Ladder & the Dreamlanders; Grand Victory on 10/18 (9 PM) with The Netherlands, DON'T, Gentlemen, and Cinema, Cinema; and FreeCandy on 10/20 (905 Atlantic Ave, 2nd Floor) with The Suzan, Trabajo, 1200 Trees, and Unkle Yva Punkfaggot.

Those local dates are the only ones the band has scheduled at the moment. You can read them in list form, listen to those song streams, and watch those live videos below.